When you’re a beginner in the hog industry, the lingo can be quite daunting. Educate yourself on these commonly used terms and hold your own when speaking with experienced farmers.

This article is part of the series The Complete Guide to Raising Pigs in your Backyard. Click here to check out the rest of the series!

I still remember the first time I called to inquire about purchasing feeder pigs from a local farmer. “Are you interested in gilts or barrows?” She asked me. I had absolutely no idea what she was talking about and sheepishly asked what she meant by that. So, in an attempt to save all of the other clueless homesteaders out there from complete embarrassment, I have put together a list of commonly used terms in the world of pig farming.

Barrow – a male pig that was castrated before reaching sexual maturity.

Feeder– a piglet weighing between 40-80lbs that is sold to be finished.

Gilt – a young female pig that has never given birth.

Grower – a pig that is intended to be raised/sold for slaughter.

Runt – the smallest pig in a litter.

Stag – a male pig that was castrated after reaching sexual maturity.

Swine – a term for pigs or hogs.

Drift – a group of young pigs.

Drove – a herd or group of pigs.

Singular of Boars – a group of boars.

Sounder – a group of feral swine.

Team or Passel – a group of hogs.

Boar – a male pig over 6 months of age that can be used for breeding.

Breed – to allow a male and female animal to mate; a group of animals with the same characteristics and ancestry.

Castrate – to sterilize a male pig by removing the testicles.

Estrus – when a female animal is in heat and ready to mate.

Farrowing – birthing of a littler of piglets.

Gestation – the period of time between breeding and birth, approximately 114 days.

Heritage Breed – the pedigree of a purebred animal that descends from a time before industrial farming.

Litter – a group of piglets born to a single sow.

Sow – an adult female pig that has farrowed a litter of piglets.

Wean – to transition an animal from it’s mother’s milk to adult food.

Forage – when pigs attain their own food by searching their environment.

Rooting – when pigs dig up the earth with their noses in search of food.

Wallow – a muddy puddle pigs use to cool their body temperature in hot weather.

Belly – The underside of a pig.

Dewclaw – the small appendage just above the hoof on the posterior side.

Hock – the back leg joint.

Leg – the leg of a pig from which ham is derived.

Loin – the muscles on either side of the spine which produces pork tenderloins.

Jowl – the underside of a pig’s neck.

Pastern – the bone that connects the hoof and leg joints.

Rear Flank – located between the ribs and stifle.

Rump – the area on a pig’s back just above it’s tail.

Stifle – the “knee” joint in the hind leg.

Cuts – the end products of pork after the butchering process is complete. Usually packaged into individual serving sizes.

Finishing – the phase between when a pig is born and when it is ready to go to market.

Hanging weight or dressed weight – the weight of a pig carcass after it has been gutted and prepped for butchering.

Processing – preparing a slaughtered animal for packaging or storage.

Catch the rest of this 6 part series The Complete Guide to Raising Pigs in your Backyard to learn the fundamentals needed to raise your own pigs. 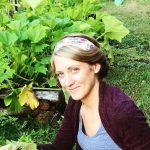 I’m Audrey – an avid gardener, home chef, do-it-yourselfer, parent and full-time blogger. My husband, Ben, and I have 3 beautiful children Liam, Colton and Elaina. This is where we share our journey down the road to self-sufficiency and we hope to inspire others to do the same!